Just got back from an estate sale about half hour ago. It was family run, which can be a good or bad thing. In this case it was bad.  Bad = unorganized, chaotic, random pricing.

It started at 9 so I arrived at 8:30.  I was #29 on the list.   9:10 the doors open and what happens?  One guy starts calling names but the crowd of people just rush the door and push through.  Mind you, he's still calling names as 4-5 people push through the door at a time. Um, sure, I'm Sharon.  I did not rush the door but as I saw people who were behind me and arrived at 9:05 getting in I started to move faster.  What happened? The door closed in my face. "All full" they say.  WTF!?  I had been waiting for 40 minutes. I was not having it.  I am not embarrassed to say I pounded on the door until the guy answered. I explained what happened and got in.  What a joke!  Then why have a list in the first place?

Based on that, you can imagine the scene inside.  Only one guy pricing things and taking payment.  Hoards of people swarming him.  People pushing, jumping over things, the works. My nightmare. I am not into that at all. I would rather just not go. To make things worse the sale was just so-so.  A lot of things were way over priced. Nothing was spectacular "mid century" either.  I ended up with 2 bags full of smalls.  Nothing to write home about but at least I did not leave empty handed or waste 2 hours of my day.

The check out - ridiculous.  I was polite and made a line behind a guy with a pile who continued to add to it and shop.  I could tell he was close to checking out though so I waited.  People would cut in with 2 things and pay, fine.  After that happened about 4 times enough was enough. I told the single-money-taker-man, "I've been standing here to check out for more than 20 minutes and people keep cutting in". The woman waiting behind me echoed that - then the guy behind her.  So, with that the money-taker-man said "You're right, let me help you now".  UGH!!   Makes me really appreciate well-organized, estate company run sales.

Thanks for reading my long rant. I needed to vent.  Well, here are my measly purchases. Oh well.  There were other cool things but he wanted waaaaaay too much for them.  Please, do you want to sell it or box it up and store it or give it to Goodwill for free? 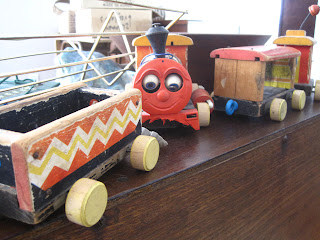 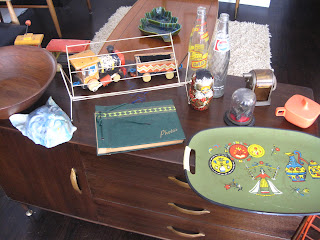 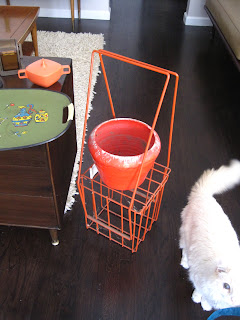 All in all it was sort of a bust.  That's the territory though. You never know what you'll find. I could have walked away with authentic Wegner chairs or something. You've just got to keep going and dealing with the crap stuff.
I do really like some of the things I got though: the huge teak bowl, the old wood toy train set, old bottles, the nesting dolls and oh yeah, the weird blue cat face.  I love strange things!
Better luck this weekend. There are some good sales listed for Saturday.
Posted by Rhan Vintage at 11:16 AM

I had to chuckle when I read this post. Not at your experience, but, I am attending my first estate sale tomorrow. I'm wondering if I should wear a helmet and body armor. I have visions of a Walmart-on-Black Friday like stampede. I did speak with one of the owners conducting the estate sale and she told me they have a bouncer. Lordy...maybe I should take a small bat or other defensive item. LOL You did pick up some cool items.

I would've gotten loud too! You wouldn't want to see me in a situation like that. I'm very nice and patient until I get some bad customer service, then my husband says, "I can't be around you when you escalate situations with companies." He doesn't like to see my mean face I guess. :) Good thing you spoke up though... family run or not someone had to take a stand against that crap.

Sounds like a few estate sales I've been to that were almost total busts. After going to that much trouble, you feel like you have to buy something, just to keep it from being a complete fiasco.

Krazy4Mod, I had to laugh at YOUR post. I can see you with a helmet on! In reality, I've been to more organized and professional sales than bad ones. This just happened to one of those funny-bad ones! Have fun at your first sale!!!